The Anthropocene epoch, as Claire Colebrook describes it, “appears to mark as radical a shift in species awareness as Darwinian evolution effected for the nineteenth century.” The first episode, mobile ontologies, adds to this speculative moment by positioning ‘mobility’, as central ontological category that might be drawn upon when confronting ‘the planetary’ as either a philosophical problem or material condition. Together, the interventions make a simple, yet crucial ontological claim: In a world of becoming, the mobility of people, species and things is the norm rather than the exception.

An Ontology of Motion for a Moving World

“All that we recognize as truth is necessarily linked to the error represented by the ‘stationary earth.’”1 —George Bataille


We live in an age of geological movement. We are accustomed to treating the earth as a stable or static place that we live and move on but today this “stable” ground is becoming increasingly unstable. More people and things are on the move than ever before—and more unevenly than ever before as well. The massive terraforming project of capitalist globalization has produced one of the most mobile geological epochs of all time. Geological strata are now up in the air and on the move. Minerals have been dug out of the earth, turned into technologies, and thrown into circulation around the world. Vehicles (cars, trains, planes, boats), living bodies (humans, animals, plants), and even space debris (rocket parts, satellites) now compose enormous circulating geological strata. Inside us there is a geological layer of micro-plastics sedimented in our bodies. Below us there is a geological layer of chemicals and trash sedimented in the ground and in the oceans. Above us there is an enormous sub-lunar strata of space debris traveling as fast as 17,500 miles per hour. The atmosphere is now layered with mobile strata of radio waves, airplanes (along with flying human bodies), various balloons, carbon dioxide concentrations, and ozone holes. Our biosphere has also become increasingly mobile, with more than half of all remaining plants and animal species on Earth currently migrating north and shipped around the globe as food and fuel. In short, I believe we are witnessing the emergence of a new geological epoch defined by increasing planetary mobility: the Kinocene. This is such a shock to our geological imagination because our understanding of what the world is and how it works (our “ontologies”) have largely considered the Earth as something stable: as the static ground of being and knowing. The Kinocene should therefore be a loud wake-up call to us that the dominant Western ontologies of stasis, stability, and foundations are not only wrong, but are extremely dangerous. We have made a terrible mistake. Today, it no longer makes sense to think anthropocentrically of humans as transient occupants moving on a relatively static earth. Humans are geological, atmospheric, and hydrological agents entangled in all the Earth’s processes, which are now increasingly in flux. The arrival of the Kinocene, more than any historical event, is finally awakening us to the realization that there never was a static, stable, or predictable earth in the first place. Much has been written about climate change and the role of certain humans as geological agents, but the most radical discovery of our time, I would argue, is the unpredictable agency and mobility of the earth itself. The most apparently stable of all our material and theoretical foundations is therefore today increasingly in flux. Continuing to think of the Earth’s being as a static, uniformly predictable, linear, or mechanistic substance allows us to continue to act as if we can pollute and extract as much as we want without significant uncontrollable kinetic consequences. If the earth is just a bunch of stable stuff then we can treat it however we want and mitigate the problems with geoengienered solutions.2 However, no such currently proposed technical fixes are feasible.3 It is anthropocentric hubris to anticipate them. A first step out of our current dilemma is to reframe the problem itself. We need to abandon our fixation with fixity. We need an historical ontology of movement for a moving planet. The Earth is not nor was it ever made of stable or discrete things, substances, or essences but of flows that cycle and fold into metastable patterns. Humans and their knowledges have never not been part of the Earth. The Earth is not made of structures or systems but of fields or patterns of circulation. This is both the condition for the possibility of our current instability and the condition for its metastable resolution. The Earth was not stable and then certain humans made it unstable. The Earth was always in turbulent and metastable motion. Understanding that the world is fundamentally mobile, metastable, sensitive, and relational it is thus the fundamental starting point for any response-able ethics for our time. We cannot hope to ethically respond to a world in motion without a mobile ontology.4

3. See Marcia Bjornerud, Timefulness: How Thinking Like a Geologist Can Help Save the World (Princeton, New Jersey: Princeton University Press, 2018) for a description and critique of various technological fixes to climate change. ↩ 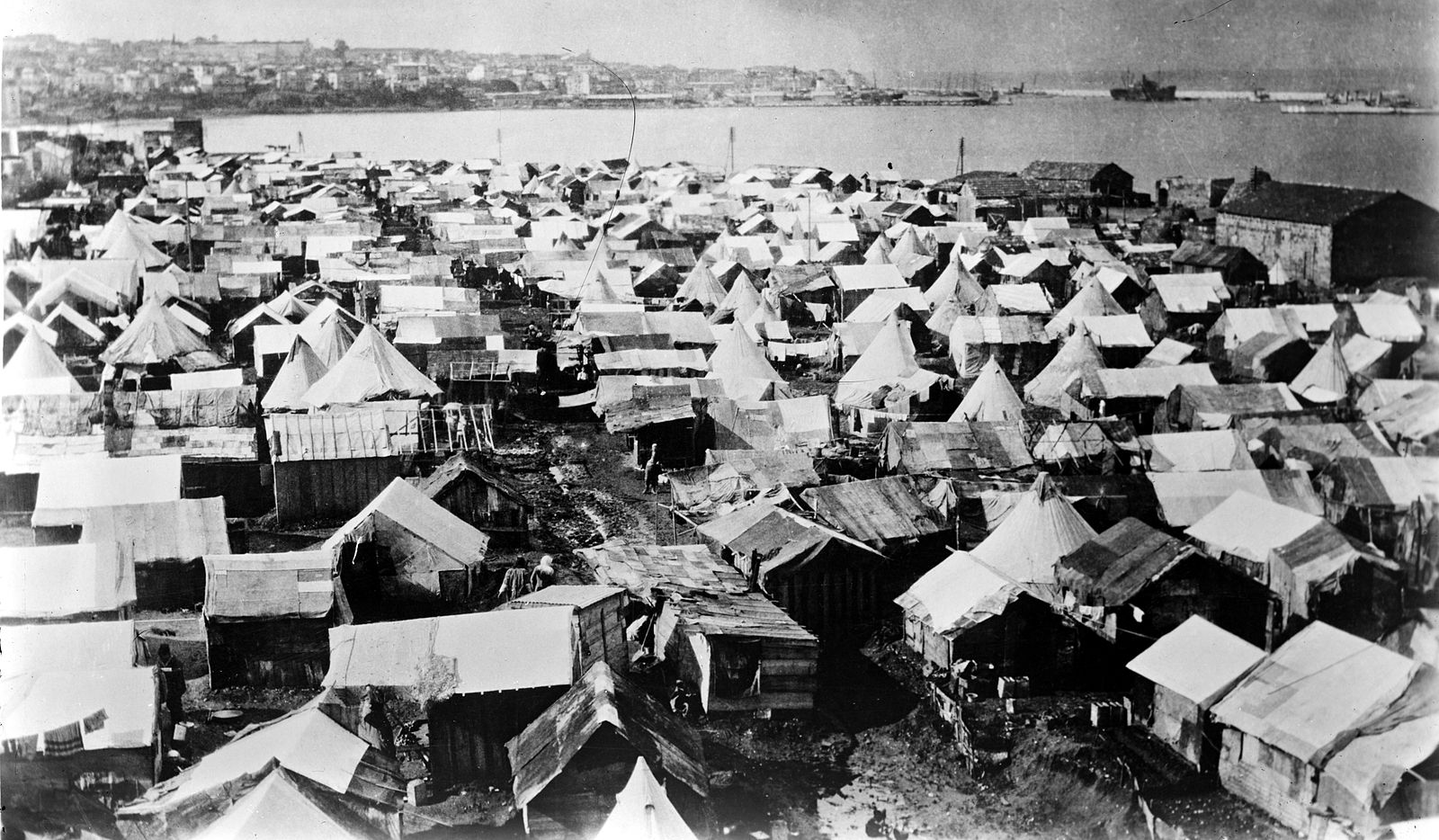 Mobility in the Anthropocene

One thing that we are often told about the Anthropocene is that the solutions that were available in the Holocene are no longer feasible (Dryzek, 2015; Rockström, 2016). As can be seen by the contemporary problems the refugee crisis is causing EU elites and attempts by the UN and other international agencies to encourage camps for internal displacement to prevent refugee flows, migration is increasingly less likely to be seen as politically possible or to be encouraged as a form of mitigation or adaptation. The first aspect that highlights what is at stake in the shift from a modernist view of mobility in the Anthropocene is that the separations of spatial territorialisation are no longer considered paramount: ‘there is no outside’, ‘there is no “away”’ (Ghosh, 2016: 26).
In the Holocene, or under modernist assumptions, there were two ways of addressing the problem of climate and migration. The first was to move: human migration has followed changing climates as well as socio-economic changes so much so that some authors claim that, taking the long view, mobility is the “normal condition” of human beings rather than fixity (Kardulias and Hall, 2007). The alternative to moving was staying put: the development of science and technology and its application to agricultural productivity and landscape and land-use changes to facilitate population sustainability.
However, in the Anthropocene, mobility is not considered to be a solution, but rather to reproduce the problem. Scientific and technological solutions at the level of mobility can no longer evade the problem through displacement to some other space. Artificial solutions that deal with consequences rather than causes, which try to prolong the status quo, are held to merely store up greater problems for the future, cascading problems through the global system (Chandler, 2019).
So, it seems clear that one thing that the Anthropocene concept occludes, when thinking about climate/environment and migration, is the possibility that ‘human mobilities’ can address problems through spatial mechanisms. As Dipesh Chakrabarty asserts, the Anthropocene is a ‘species’ problem: there is nowhere left to relocate to. The Holocene choices of development or relocation, in fact, went together as the exponential growth of the human population depended upon fossil fuels and artificial interventions in agricultural production – the forces which closed these options constituted the Anthropocene as therefore a ‘planetary’ problem, making mobility part of the problem rather than the solution (2015: 50-55).

References
Dryzek, D. 2015. ‘Institutions need to radically change for the Anthropocene epoch’, LSE Blog, 7 January.
Chakrabarty, D. 2015. ‘The Anthropocene and its Histories’, in Hamilton, Bonneuil and Gemenne, ‘Thinking the Anthropocene, in The Anthropocene and the Global Environmental Crisis. London: Routledge, 44-56.
Chandler, D. 2019. ‘Resilience and the End(s) of the Politics of Adaptation’, Resilience: International Policies, Practices and Discourses, forthcoming Vol. 7, No. 3 (2019)
Ghosh, A. 2016. The Great Derangement: Climate Change and the Unthinkable. Chicago: University of Chicago Press.
Kardulias, P. Nick and Hall, Thomas D. 2007. A World-Systems View of Human Migration Past and Present: Providing a General Model for Understanding the Movement of People. Forum on Public Policy.
Rockström, J. 2016. ‘Goodbye forever, friendly Holocene’, Guardian, 22 September. 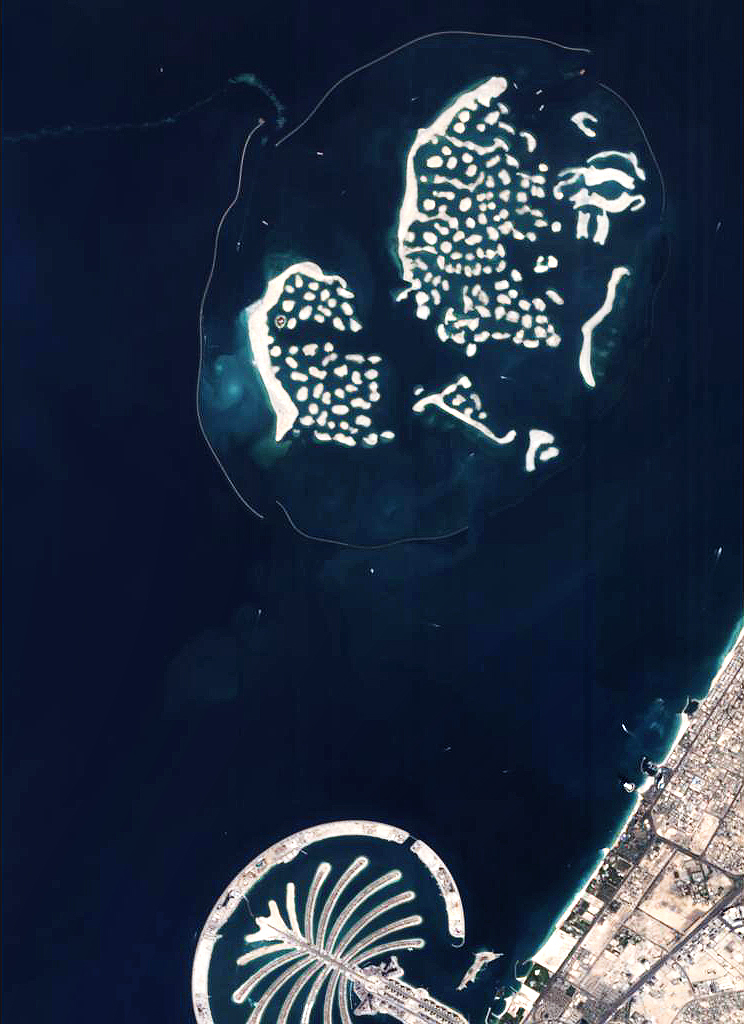 “Palm Jumeirah (left) and The World islands” by ESA